Changes in fish consumption patterns: can they tell us anything about fish stocks?

Fisheries data are of paramount importance if we want to know more about rivers and oceans. With this information, it is possible to monitor and manage the populations of fish and invertebrates inhabiting these waters, plan sustainable fisheries exploitation policies and maintain environmental balance, while also guaranteeing human nutrition and preserving the aquatic fauna.

Something apparently so simple, such as fisheries statistics, however, are increasingly rare in Brazil and other developing countries. This is why scholars studying the environment need to make use, with increasing frequency, of alternative methods to obtain data that can fill some of these knowledge gaps.

This is how this study was born. Comparing information collected in studies that followed fish intake by families in fishing villages in the South and Southeast regions of Brazil since the 1980s, we identified an ever-lower consumption of predatory fish and invertebrates, while the presence of smaller-bodied species increased on the plates of these families. We also investigated temporal changes in species richness, diversity and composition, size and trophic levels of fish, consumption of species threatened with extinction and the functional diversity of these species, that is, species with different preferential behavior and habitat.

Our findings are worrisome because they confirm the trends observed around the world for fishing data. Such trends show that over the decades there has been a decrease in the trophic level of catches. The trophic level represents the number of steps in a food chain, in which the top predators occupy the highest levels. Herbivorous fish, for example, have lower values and omnivores have intermediate values. Humans tend to consume fish of high trophic level, such as groupers and meccas. However, these are less abundant than those of lower trophic levels, such as sardines. These species of higher trophic levels have a greater propensity to be exposed to fishing above the population's renewal capacity, leading to a decrease in their frequency in the nets and in the dishes. Thus, they are more quickly subject to over-exploitation and this is detected by a general drop in the trophic level around the world. Apparently, we may be seeing the same trend in the diet. 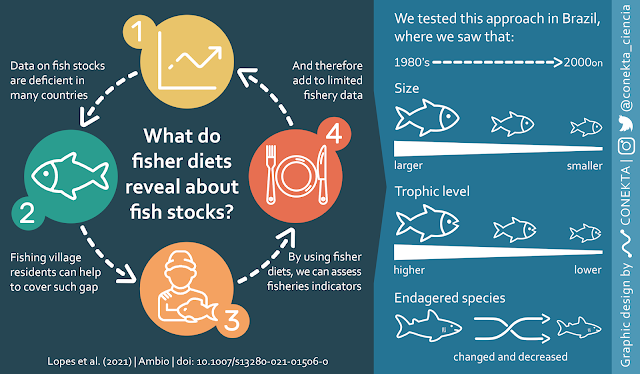 Another relevant change concerns endangered species. According to our study, their consumption has always been low, but most of these species have changed over time, suggesting that many, especially rays and sharks, may have become rare on the plates. We were not able to conclude whether people stopped consuming these species from before because they decided to do so on their own, which is unlikely, or whether these former species became increasingly rare and were replaced by other threatened species in the diet.

That is why it is necessary to interpret these data with caution. It is not possible to say that these species are becoming extinct by only looking at what is happening with the diet, in the same way that it is not possible to ensure that the lower consumption of predators or the smaller size of the fish is because the larger ones are rarer. There are associated cultural factors that we have not been able to isolate. People may be selling the largest fishes or they simply stopped consuming some species now that access to the market is easier. However, these negative trends confirm those observed in the world and turn on a yellow, almost red light.

In addition to the environmental aspects, many other fields can be explored in the future based on the information raised in this study. The database we put together is quite large and may allow other questions to be answered, including those of a nutritional nature. We have information, for example, about the other food items that people have been consuming in fishing villages for decades. We can investigate whether there has been a replacement of fish for other proteins of animal origin and assess the nutritional and financial value of this replacement, which could identify aspects related to the health of these communities,  and their food security and sovereignty.

So, there is a huge potential to obtain even more comprehensive data. If we improve our collections of household information, such as those made by the Brazilian Institute of Geography and Statistics (IBGE) and similar ones elsewhere, by better detailing the species of fish consumed, we may have an additional source of indirect information on fish stocks, but this time on national scales.

The paper can be found here:

While COVID-19 is taking a very high toll on Brazilian indigenous people, especially by reaping the elderly, who are the main holders of forest knowledge (1), the moment is being used to bend the rules and to force environmental deregulation (2). In 2016, Belo Monte, the third largest hydroelectric dam in the world, started operating partially despite its expected socioecological impacts over a 100 km stretch known as “Volta Grande do Xingu” (3). Full dam operation was due to begin in early 2020 and, along with it, a 6-year highly contested hydrograph test period that would alternate between a harsh and a harsher flood control annually (4).

However, a strong El-Niño in 2015-2016 significantly reduced the river flow to levels that, although above those of the alternate hydrograph, prevented the natural forest flooding. This natural experiment compromised ecological processes, including the reproduction and growth of fish and turtles, and impacted the Indigenous peoples who depend on the natural environment (4). In April 2020, after strong and continuous pressure from the civil society, the Brazilian Environmental Agency (IBAMA) demanded the adoption of a less severe transition hydrograph for the year. This decision was not initially questioned by Belo Monte operating company, possibly because the Covid-19 pandemic first resulted in a significant drop in industrial activities, and therefore, in the energy demand. As demand for energy resumes, a dangerous strategy seems to have been set in motion to avoid fines and still achieve the required average flow. For example, the required flow for July is 1300 m3/s), which one supposes would be more or less the daily flow every day of the month. However, the operating company adopted another strategy: it strongly reduced the flow during the first 20 days of July to an average of 1022 m3/s, which compromised navigation, fishing and regular river-related activities. In the last days of the month, the company greatly increased the flow to a daily average of 1517 m3/s. By doing that, the company probably maximized its energy production and decreased its chance of being fined, with no concern whatsoever for the socioecological consequences of playing with the flow.

Sudden increases in flow were made without due notice to communities, who still lack alarm systems. The Indigenous peoples reported losses of boats, engines and ornamental fishponds, which represent, for many, all of their assets. At a time of extreme vulnerability, Amazonia and its people are paying the highest price for a policy that promotes impunity (5), with consequences yet to be seen. This example also raises the question: will this be the “new normal” to Amazonia’s environmental policies?

2.         A. Press, Brazil: blow to Bolsonaro as judge orders release of expletive-ridden video. The Guardian (2020), (available at https://www.theguardian.com/world/2020/may/22/bolsonaro-brazil-cabinet-video-court-judge).